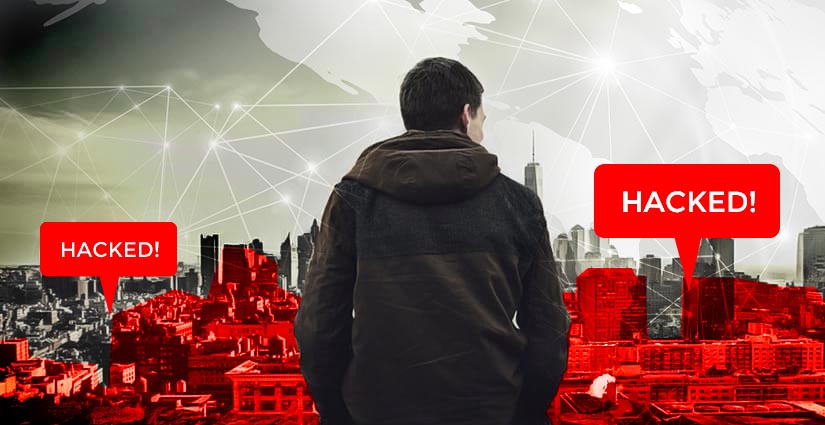 What Happens When a Smart City Gets Hacked?

It was only recently that a major hack took place that targeted Internet infrastructure in the US with one of the largest DDoS attack ever recorded. The root cause was tracked back to overlooked security vulnerabilities in hundreds of thousands of compromised connected video cameras. Similar IoT-enabled cameras and sensors are driving forward the Smart City initiative that depends on these devices to manage the entire city’s infrastructure and assets.
Essentially, this dependency suggests that even the smallest of security weak points within the Smart City infrastructure can escalate security exploitation to unimaginable and uncontrollable levels.

Is a Smart City a Dumb Idea?

Just think about it a moment. If we take the concept of a Smart City to its goal, we have a very real potential for catastrophe if security vulnerabilities exist within the technology used.
Consider for a moment that a) by 2050 it is predicted that over 66% of the world population will live in an urban area and that b) smart technology is going to be the only way to manage these huge urban populations.
Smart cities are not simply a pipe dream, amusing on the potential of creating a digital utopia. They are going to be a fixed requirement for the changing shape of the global population. In effect, they are an unavoidable byproduct of the steady shift towards global urbanization.
So, what are the implications of a Smart City being hacked? In a worst-case scenario, we have death and mayhem. At the other end of the scale, we have day to day life for residents interrupted and hindered.

A Public Exposed to Harm Through Bad Technology

Currently, most successful hacks target network infrastructure that is responsible for carrying data. So, if one is successful, we might lose access to our favorite website or TV channel for a while. An annoyance, buy hardly life threatening.
Now fast forward, to a time when smart cities are helping to ease traffic by routing and possible driving our smart cars. When emergency services and law enforcement is centrally controlled and managed via smart technology. When public transport is scheduled and managed using tech. And when everything down to booking a tennis court at the local community center is the responsibility of the technology running the smart city.
Hackers for almost the very first time, can start getting physical in their attacks. These could be relatively harmless attacks such as block booking that tennis court for the next 100 years. But they could also be life threatening if they gain the ability to begin rerouting traffic whilst sending the emergency services elsewhere on a wild goose chase.
Smart cities are fast becoming a reality. However, the technology we are using to build these digital urban playgrounds is far from being secure. There is a clear and present danger in rolling out smart city deployments before the standardization of IoT device security is first specified, and then adhered to by every manufacturer.